[et_pb_section admin_label=”section”]
[et_pb_row admin_label=”row”]
[et_pb_column type=”4_4″]
[et_pb_text admin_label=”Text”]
A very fishy business! And in so many more ways than one! A recent trip to Blue Eye Seafood Restaurant down in Salamanca was interesting…

My Polish friends loved this place and had recommended it several times, so with our Melbourne friends in tow, we headed out. As always these days, that Salamanca precinct was busy, busy. And our fish place was pumping.

And it was curious. And grew more and more curious by the minute. While a pleasant waitress tried to seat us at the front, Lidia would have none of it. She’d booked us a particular table, which was vacant and waiting, and that was where we sat.

While perusing the wine list, John called a passing waiter for an opinion. “What’s this like?” he asked. John pointed to a Republic Shiraz Cabernet, a South Australian red, and the cheapest on the list at $32.50.

The waiter leaned into John, put his hand over his mouth, as a fellow conspirator, and said, “Quite frankly, it’s f***ed. I wouldn’t recommend it.” Neither would I if it were that bad, I thought.

Now I love the ‘f’ word. I love its versatility, its shock value, and the sheer “I don’t give a damn” Australianess of its use. And this was funny. But I did have to think that the waiter may have had a rather liquid lunch. Or afternoon Long Island Tea.

But we soldiered on. John finally put in an order, and Bronek decided that the special of char-grilled blue eye on a bed of mash, asparagus and green jus at $36 had to be tried. A note here: the menu is large (I think way too large) and the small plates are reasonably priced at between $12 and $16, and they even do burgers at $17.50, which in this type of restaurant, is good value. 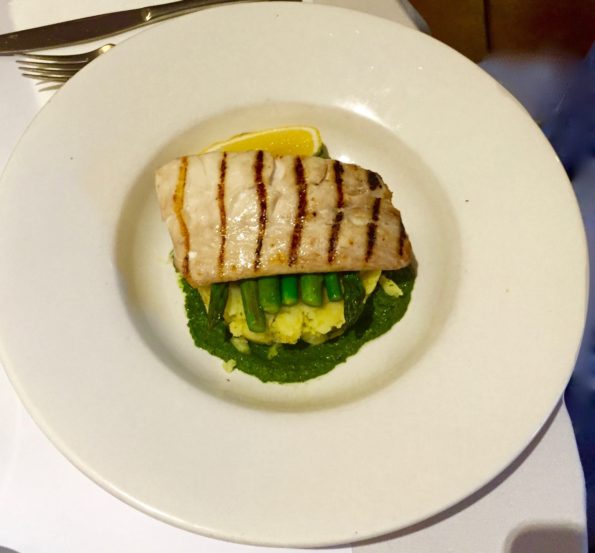 Fish of the day

Des had the prawn linguini with chilli, garlic, parsley and rocket, $27.50, Lidia had the blue eye, John plumped for the “Moo Brew pilsener battered” flathead at $32.50, and I went for “The Lot”, $32.50. This was battered fish, crumbed scallops, squid, fishcake, prawn dim sim, ‘potato cakes’ (1), chips, salad, tartare sauce, lemon. Meanwhile the drinks waiter pirouetted to and from the table, gaily serving drinks with happy abandon. A second girl came up to take our order, which really wasn’t necessary. (Another rant! Whatever happened to waiters’ sections???)

And the food? The photos tell the story. It was okay, but not fantastic, and our Bronek was very disappointed that his blue eye fell far short of his recent visit. The mains are not cheap, but neither is seafood these days, and a little more imagination with the actual construction of the dishes would go a long way.

And having eaten out at Frogmore Creek just a couple of days before, we had been well and truly spoilt. And why were we served very ordinary plain chips straight from a plastic bag via the deep fry??? When even pubs at Salamanca are serving marvelous chips that are fluffy inside, crisp and wonderfully seasoned outside, why are we being served meals that belong in a pub from twenty years ago? And on the whole, that’s what it was. The Lot at Blue Eye

The charred blue eye was good, the linguine was good, but the rest? Très ordinaire. We swerved on the entrees, the dessert even (the serves were big), and marched home. The drinks waiter was nowhere to be seen!

If I had ordered, as I was going to, the Surf ‘n Turf, at $49.50, and been served those chips, with a scotch fillet, even if it was born in Longford, I would have been bitterly disappointed. And I wouldn’t be surprised if the ‘mushroom or pepper sauce’ had its origins in metal.

It’s not hard to do good food these days. Trim the menu, read some cookbooks and get cooking! It’s that easy! Well, not quite, but this place needs a hard eye and strong hand.

What did we take away? Full tummies, but an air of dejection settled over the party. With so many good food places around, for me, the old Blue Eye, which is not that old, will have to lift its game before I return.

How do you feel, readers?