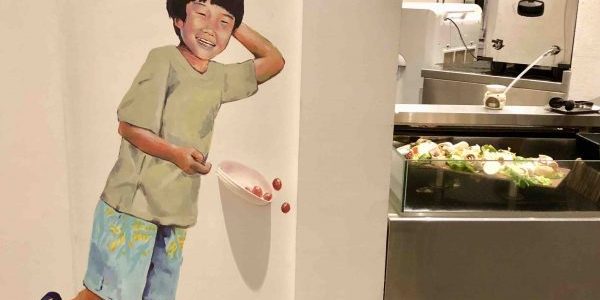 Penang pumps. Day and night, wherever you are, whatever you are doing, life bustles on around you. And the food scene is a fireworks of tastes, flavours and options. Here’s some Penang highlights that we’ve recently explored and why.

Leong Kee Tim Sum was my first foray in Penang into that marvellous Chinese heritage of little bites and dainty morsels that come out fresh for your choosing for breakfast or brunch. Many new friends I’ve made are expats, but know this town and island backwards. So we’ve been sampling food around the traps, and here are a few highlights.

Buffet lunch is a big thing here. It’s cheap, and filling, and gives the customer a huge array of choice that at times I find overwhelming. And it’s always fresh! Forget those tired hotel buffet spreads of old. These hawker style buffets spring up and feed an army who queue to get in line and out again. Even a set buffet restaurant chain which locals call “Economy Rice” has people queuing at their food service area, and it’s certainly first in best dressed. Ladies in a production kitchen right on the street

Yong Pin Restaurant, in Lebuh Cintra in the heart of Georgetown, is our mission on this particular day, and Chin introduces us to the owners, takes us out the back where giant steam baskets sit on top of specially made water baths on gas burners that drown out the clamour around it. The place is long and narrow, as are many in this old city, and the kitchen sprawls from room to room, with the sections set up vertically, rather than the horizontal tradition of French styled kitchens. It’s fascinating. And when we sit, are served our Oolong tea and choose from enormous trays of dumplings and rolls, and treats, we watch as the crowd ebbs and flows around us. The biggest and best bao I’ve ever had

It’s always hard to choose, and we eat our fill, drink our tea, and then of course marvel at the bill. We ate heaps, and the entire bill for 4? 40 MYR or the equivalent of $3.35 AUD each. I might also add that the waiters have large scissors that they use to cut any items into pieces so it’s easier to share. When did all this become so easy? See the peanut crusted rice cake above? Cut into pieces and we didn’t even have to ask. Mind you, we have chopsticks which aren’t exactly made for cutting, but they thought of that, didn’t they?

And on to the buffet scene. Christian Heidenreich, a top chef and friend of mine who’s now living in Malaysia, visited recently so I could write his story. And we headed to the Hilton Hotel – Double Trees Resort at Batu Ferringhi for lunch. Now the buffet there looked actually pretty miserable, and it was spread awkwardly across so many different sections, it was hard to get a grip on what was actually on offer, and what was there looked pretty tired. It was only 1.30pm, and Christian hates buffets for good reason. Particularly in hotels. The artwork that dots the area though is fun and clever. Like so much of this ‘street art’ in Penang, it’s a brilliant mix of 1, 2 and 3D. We ordered a la carte, but that was pretty forgettable, my samosas were greasy and his Mee Goreng was okay. And not cheap, but it’s Hilton I guess, with good service and beautiful décor.

My local expat friends, Neil and Chin, however, swooped us around on different days to Economy Rice, their favourite local haunt in another part of town, the Air Itam area. There, the selection was fresh, the tea free of course, and I learnt that in this sort of buffet deal, the person at the end of the line on the cash register, or box, assesses what we all have on our plates and charges accordingly. Big scoop? Maybe 2 MYR. And some dishes are more expensive than others. I fill my plate with what appealed to me and what did it cost? $8 MYR or $2.90 AUD. Total. Lunch? Done. And delicious. Last on the list for the moment at least, is a marvellous local hawker buffet restaurant in Tanjung Bungah opposite the floating mosque. Like all my great experiences here, we’re the only foreigners there, and line up to dish our plates full of local delicacies. The open kitchen is right there as you walk in, and while it’s old and shabby, it’s actually still pretty clean where the food is cooked and served. This place is called Lat Restaurant, and is in an overflow carpark underneath a huge condominium where locals rush to get seats and get there early because if you don’t you’ll miss out. Lat Restaurant serves the goodies, and as always, the choice is huge. As a last photo, I’m actually going to post the picture of the open kitchen, and while many people might just have a heart attack, the actual food preparation is clean and fresh. And no, no nasties at all so far in almost two months for me, and I have a sensitive, dodgy tummy from getting dysentery in Egypt in 1982. And that, dear foodie, is for me the ultimate test. The chicken here is always fresh and tasty in particular, and like the chickens my grandfather used to kill in his suburban backyard in Brisbane so many years ago. He’d grab dinner by the feet, hack the head off in one clean blow, then watch it run round and around until it ran out of steam. And dropped. I think he thought it shocked me, naughty man.

The beef here can be tough at times, and is usually cheaper cuts of Aussie beef that they’ve not slow cooked long enough to render tender, and one very nice man at the I Love You Food Court in Batu Ferringhi who serves Mary’s Tacos, served up a horrendously tough beef taco. But, he took some instruction on better cooking processes and preparation really well, it turned out he was from Shanghai and had been taught Tex-Mex food in Shanghai by fellow Chinese. Hmmmm. A kitchen that dishes out enormous quantities without fuss

So often it’s either women in the kitchens of these hawker stalls, or a mix of women and men. Grandmothers happily work alongside family members, satisfied that they are relevant and needed. The equipment is rudimentary, but the stainless steel benches are usually spotless, and while the floors often leave a lot to be desired, they are what they are, and the food is always guaranteed fresh. Because they sell out. Close shop and go home. There’s a lot of take aways for western business in these lessons from a hot steamy place far from home. Penang highlights? Just the beginning.