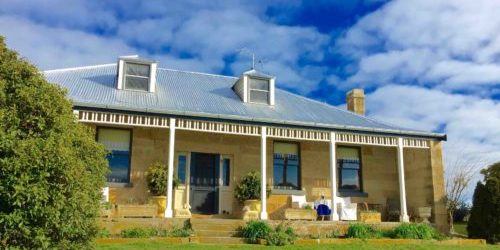 This country retreat is a fine gem brought to life. And what a magnificent spot for a retreat.

A country retreat needs to be special, and as I drive around to the back end of the property – of course, why would I go to the front? I get an idea of the scale of this beautiful piece of Tasmania. When I find the front – and it was there all the time, wasn’t it? I have to stop and get out of the car. Cally and Richard from Rathmore House

RathMORE is too beautiful to bypass. It needs to be savoured. Bucolic vistas surround this gorgeous, pretty Georgian home. Nestled at the top of a small rise, it watches serenely as the sheep graze. With gables and gardens, it’s solid and fixed, as if it’s always been there.

What do you look for in a country retreat? That sense of well-being that should pervade the air? To learn and be cosseted, wrapped snugly in the warmth of good vibrations, good food and wine? Or just to be able to drink in the views, the peace and tranquility that comes from being in lush, verdant countryside way off the beaten track? Well look no more, because I’ve found it. This place, this country retreat, delivers all the above, and more. I have to say here, that Cally Lyons, who has recently become another reverse Mexican (from Queensland) is an old friend and colleague. Cally used to supply Possums, my last restaurant in Brisbane with desserts. And there’s a reason for that. This place, this country retreat, delivers everything you’d expect, and more.

She’s a fantastic cook, an amazing business woman and has the magic touch. In those days, she had baby number two in a bassinet, and he’s a strapping man of 33 now. Cally went on to have a successful deli and catering business with Annie Boyd,  “Clayfield Market Kitchen” where they fed royalty as well as the who’s who of Brisbane and Queensland. So many years later, Cally has found peace and a new chapter in Tasmania. The Derwent Valley area, Central Highlands to be exact. And what a place.  For Cally and her husband Richard who is also an amazing cook, it was a long and winding road that brought them together down in Tasmania on their honeymoon in 2003, which they never forgot, and vowed to return. Return they did, and Rathmore beckoned like a Lorelei that would not take no for an answer. The Shearer’s Quarters & Cottage have been revived & are now comfortable rustic accommodation; guest bedrooms in the main house are luxurious and inviting. On 92 acres, Cally and Richard have achieved a huge amount in the just 18 months they’ve been here, creating a warm & welcoming property they are delighted to share. The 1828 Heritage listed house has a calm that I found extraordinary. No ghosts here. I slept like a baby – in fact had the best damn sleep I’ve had in years, and returned to the city so refreshed I vowed that Rathmore will become a permanent fixture on my calendar. It’s that good. What’s the first retreat that Cally is launching? It’s an art and well-being retreat, where guests learn from a wonderful artist, June Wilson, in ‘plein air’ and as an added bonus, work with Rachael Downie on “Opening the Creative Mindset” and that knowing/doing gap that holds so many of us back. The package is all inclusive, and would be worth going just for the food and accommodation alone. Cally is that good a cook. She learnt from the best though, and counts the incredible Diane Holuigue and Prue Leith as her mentors and teachers. What are you waiting for? The retreat is for 5 days/4 nights, from October 30 – November 3, and there’s plenty to do for partners who want to tag along and suck up the atmosphere and serenity. Cally’s  and Richard’s guests already have formed a group of raving fans, and I’m sure there’ll be lots more to come.