This interview began as a one-on-one with Kylie, after I’d watched her dish up the most amazing sweet corn fritters out of a tiny tent at the Bathurst Street Farmgate Markets.

But when I went back to dig deep, there was her husband, Phil Gordon, very much a huge part of the business, and so, we got chatting. And I learnt some new stuff. Bonus!

And chatting. And discovered that we had all been around in Brisbane at approximately the same time, in the ‘80s and ‘90s, knew the same people, and shared stories and laughs. Incredible! It’s winter, and the Hobart Farmgate Markets are cold. Rigging up is de rigeur.

Working a food stall is hard work, and the actual day of selling is the end result of many days of work and preparation. Just FYI for those who naively think that what they see on market day, especially the complex Farmgate Markets day, is the sum total of the enterprise. And Kylie’s journey into the food world began from a gnawing hunger in her belly when she was 21, and pregnant with her first child. With an early interest in vegetarian food, she started cooking for friends, which morphed into catering. This was Cairns, hot, and seemingly exotic in comparison to Tamworth, the small country town where Kylie had been born.

But at this stage, the catering was just a side hustle, as Kylie was working in television and video production, and moved to the Sunshine Coast, where she met Phil, and they started cooking together. Watching them now, with an easy glow and support for each other, this was a match made in heaven. 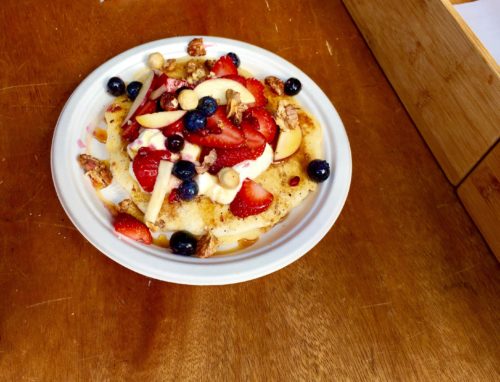 They cleverly devised an Irish Session House as their food tent at festivals. “What on earth is an Irish Session house?” I asked. “Is it like the New Sydney Hotel here, where Irish musicians come to jam?”

“Exactly,” said Phil. “It’s actually a Ceili House, and we set up a marquee with a kitchen in the corner, hay bale couches for the musicians, and it was a big hit.” It also helped at this time that Phil was the stalls coordinator for the coast’s folk festival, which became the famous Woodford Folk Festival. A Market menu, cheap, delicious and filling from Wild Thyme

Phil’s vision was part of the success of the festival – he sourced interesting stalls and stall holders, ran the volunteer kitchen which served the artists, working with Annie Lee and the Kransky sisters to name just two. Phil and Kylie ended up doing the festival circuit, from the Canberra National, country folk and blues festivals, the Story Bridge Festival and Warana.

They settled in Mapleton eventually, opening the Bella Vista Pizza and Pasta restaurant in 2003, and ran that with love for 9 years – an eternity in the business of food. They shared the cheffing, and on a trip around Italy prior, had developed a love of an appreciation for Italian regional food, particularly Sicily, Puglia and Tuscany. Well, what’s not to love, I say?

Their favourite dish? Cinghiale pasta – or pasta with wild boar, fresh porcini and buffalo mozzarella. I salivate at the thought. And where’s the Tasmania connection, and the Farmgate Markets? Phil started in Hobart, doing cold larder at the original Mures, in Battery Point, where Preacher’s Pub is now. Not full time, though, as a career, Phil is an artist, surprise surprise, and was completing his Bachelor of Fine Arts. But he loved working front of house as well, and was their first male waiter, working out front for Jill and George. George went fishing, Phil took over management, and never looked back.

Now, with such a long history of hospitality (including Expo 88 where he worked on the production of the Monster Ride and Silly Cycles!), and stints in restaurants all over, home beckoned.

With children living in Tasmania, Kylie and Phil moved to the island state in 2012, initially to start a whisky distillery, with Casey Overeem as their landlord, focusing on just producing the raw spirit for the whisky base. A clever idea, as there is potentially no shortage of distillers looking to make their own blends, without the huge expense of starting from scratch.

Phil began running the Nant Whisky Distillery in Bothwell, and ever entrepreneurial, Kylie set up the restaurant kitchen and introduced local produce and game to a menu that also included pies that were, ‘amazing’. Ainstie Wagner (chef at Government House) couldn’t believe how good the food was in this tiny outpost of the southern midlands. Some say the best scallop pies there are.

Still with the distillery ticking away, Kylie and Phil do their Wild Thyme Kitchen at the Farmgate Markets, the seafood BBQ tent at Franko in summer, in Franklin Square, and continue to work up recipes together. One – a combination of scallops, pancetta and maple syrup came from the Canadian love of the perfect dish – a combination of salt, sugar and fat that wrestles the taste buds into submission with ease.

Always busy, doing what they love, in the island state they love to live and work in, Phil and Kylie have carved their own versions of a perfect life. Food will always bring challenges, and so do customers, but hey? There’s not much left for them to achieve.