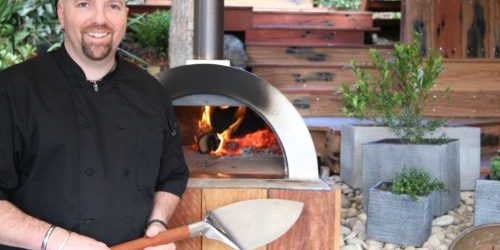 The Godfrey name has been around a long time. To steer their Drunken Admiral as well as they have deserves credit. Opening in 1979, and still going strong, it was great to catch up with the current head chef, Jamison Godfrey, and get his chef talk going.

Interesting it is too. Born into the business almost, Jam first started working at the Admiral in 1986 in his school holidays. And from there, his journey has been a long and curly one. Not content to just plant himself at home, Jamison spread his wings. The first apprentice put through the Launceston International (now Grand Chancellor), he moved to the Canberra National Convention Centre, where it was a regular service to put through a 3 course dinner for 3.5k covers. Whoah! That’s churning it out. So he got to know how banqueting works.

Moving around Australia, Jam worked for some of the best: the Atlas Café in North Hobart, he counts here; Season on Sydney’s North Shore; Rydges Hotels including Darwin; the Flying Fish Café; and Cato’s at the Noosa Sheraton, a restaurant I remember fondly. And so much memorabilia!

Jamison’s first Executive Chef job? He was 27, it was at the Rydge’s in Cronulla, Sydney and the 2000 Sydney Olympics hit the city with a bang. He learned to fly! Figuratively of course. Back home now, and what are his lessons and wisdom he draws on?

He pays his staff properly. Overtime? Paid. He still works split shifts himself, and that suits. Jam can pick his kids up from school, no problem, and loves being a hands on dad. This is music to my ears, and to hear a big successful restaurateur doing the right thing? Why not? It’s a long term strategy, cuts the churn, and everyone’s happy.

The building where the Admiral sits is old. Very old. So the kitchen is limited in space and equipment. With 2 gas salamanders, an 8 burner gas cooktop and oven with 2 deep fryers as the main work horses, the menu has to fit with the logistics. And it obviously does. We were amazed at the fast delivery the night we were there, and I guess when they’re doing 2 sittings a night, with 300 or more on weekends and 200 on a Monday, things have to be streamlined. The kitchen runs to 7 staff at any time, and pretty much everything is done in house, so from start to finish, the staff are busy.

And they have a small wash up area, so the dish pigs are kept on their toes. His customer issue? His kitchen equipment can’t run to the fat chips that Heston put on the map, so shoestring they have to be. For myself? Not an issue. When seafood this good and bountiful is on the menu, fat chips just seem… superfluous. And too heavy.

These days, Jamison’s cousin Brierlie and Simon run front of house and the media side, and his wife, Nicole looks after the Human Resources and administration.

Jam’s words to young people interested in a career in the industry? “You have to be dedicated, have a genuine interest in food and hospitality, be a people person, and most importantly? Cool headed!”

Hmm, wise words, and the fire and passion that shoots some chefs to the top, can make it a lonely peak. A kitchen and restaurant is all about team work, and while tantrums and bust outs might be great viewing on television, they are hell to work with. Trust me. Agreed?