A world of chocolate in a chocolaterie that would make Oompa Loompas jealous.

Hobart still has a couple of sweet shops, and some wonderful patisseries, and there’s Norman and Dann in Salamanca who create wonderful chocolates to buy and gift. But when I visited the Great Ocean Road Chocolaterie, that was another experience all together. To begin with, this tourist attraction is big. Purpose built, and nothing left to chance. The attention to detail is staggering. From the very get go, with kangaroo statues covered in chocolates in a play area, to the tiniest detail on chairs and tables, the cacao bean rules as the theme. Is that a new thing? Chocolate tourism? Glass cacao beans? Why not?

Ian and Leeand (not a typo) Neeland originally from WA had food and chocolate experience between them, and sought to run a tourist attraction that was different, yet plugged into the overriding ethos of the area. The first chocolaterie was built in the Yarra Valley 5 years ago, and was an instant hit. In September 2016, the Great Ocean Road outlet emerged and became a must visit as well, with locals and tourists alike. Ian and Leeand have visited Europe often, and recruit their chocolatiers from France – that qualification is still not available in Australia.

The couverture chocolate comes from Belgium, but for the rest? Everything is as local as they can get it. With 86 staff this is a big business, and Ian and Leeand are hands on. Do they ever sleep? Lee, their marketing manager laughs and answers, “I don’t think so!” They work with local schools, TAFE and other training organisations, and make sure their staff are happy, and well-trained. But it was the detail that astonished me. From the beautiful hand-blown glass sculpture of cacao beans in the entry, the inlaid cacao bean motifs in the hand-crafted tables by a craftsman from the Yarra Valley, to the original art that adorns chocolate packs – this place is a shining example of taking a theme and running with it.

The soft water colours that sit on a range of chocolate bars are by Pat Mackenzie, a local artist who paints scenes from the Ocean Road area. Nathan Paterson, a local indigenous artist put his work on a range of Bush Tucker bars, and even Cadell Evans, whose race roars past the factory gets his own range.

Ian and Leeand certainly put their heart and soul into this business, and their passion shines through. Children have their own play station, with colouring sheets and pens, and the range of chocolate goodies is staggering. My friend Marie, always a great host, dragged me down there, and I’m so glad she did.

We tackled their pizza to begin with – the Italian sausage at $18 – which was tasty and very fresh. The pizza edge puzzled me though. It’s not your traditional fluffy, yeasty edges, as they decided that rolling the edge gave a more consistent outcome. The base? Crisp and delicious, but still not quite convinced on those edges. 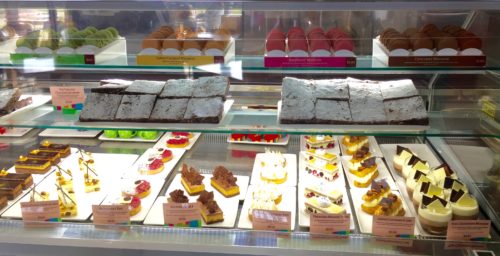 Desserts or art – you choose The cacao detail is extraordinary

The range is big, both in savoury and sweet selections, and reasonably priced.

It’s mostly self-serve in the restaurant, but the staff are friendly, and endlessly accommodating. There’s also a production/teaching room, and while we were there, a group of schoolgirls filed in to watch and learn about the magic of this humble bean.

Pizza, but not as you know it

They even stock ingredients for brownies in jars for little chefs to make, and I have no doubt that this inventive couple will keep coming up with more ideas and chocolate wares over the years to come. I could have bought a truckload to take home, and now wish I had. I’ll just have to go back. Any orders? 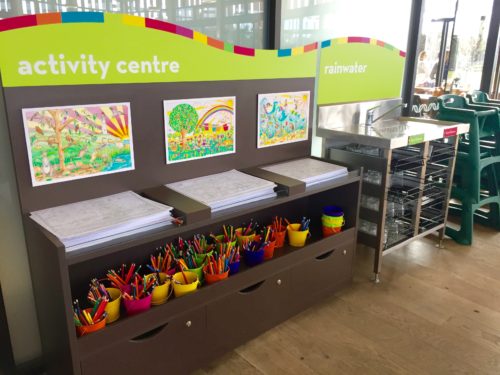 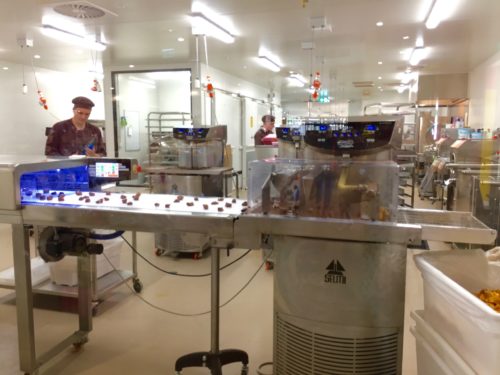 The thought of the money that’s been poured into the Chocolaterie makes my blood run cold, but it seems to be a smashing success, and with the level of thought and care behind it, rightly so. There’s passion not just on every plate but in every corner and crevice. So good to see.