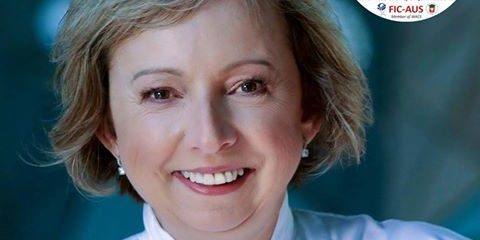 Sicily and the magic of good food…

In Chef Talk, one of Australia’s top Italian chefs stepped up happily to share her story. Carmela D’Amore, still in restaurants, at Sorrento Trattoria,  still cooking, and taking food tours to her beloved Sicily, is a standout in her love of the food of her heritage, and the industry to which she’s committed her life.

She’s had an amazing journey, as the daughter of Italian immigrants, and here she tells the story. In her words:

“My parents immigrated to Australia after the war in the 1950s. They both were from a long line of fisherman from the shoreline of the Tyrrhenian sea of Sicily.

My mother’s father had owned big boats processing tuna fish – everyone used to call him Rasi, which is leader and chief, and from childhood, my mother and father knew each other and had an unspoken promise, when they landed in Melbourne.

The first café they opened was in Kilmore – I was born in Kilmore with the smell of food, and all my life it’s been at the centre of everything I do. From Kilmore, the family moved to Campbellfield, and started working in catering services, and came up to the Mornington Peninsula in 1974. We opened up in Rye, The International, the area’s first pizza restaurant. “I noticed a lot of people had lost their love for life, so I decided that cooking classes would be the door to take them to Sicily – it’s a magical island.”

Then Dad opened up another 3 restaurants along the Mornington Peninsula, and went back to fishing, his true love. I married an artisan baker/French pastry chef, who’s also Sicilian, from Palermo, and his father was the first artisan baker in Clifton Hill in Victoria.

My first was Marco’s Pizza and Pasta, a little take away on the Mornington Peninsula which we ran for about 20 years. I loved both the tourist trade and the winter, when it’s quieter, so you don’t have to kill yourself all year round. But after 20 years, I wanted a change, so we then sold, retired, and thought is that all there is?

It wasn’t for us, so we bought the restaurant in Sorrento, which was a la Porchetta, turned it into a trattoria, where we wanted the customers to feel the heart and soul of cooking – where guests feel at home, and that’s what we created, our gift to the area, the Sorrento Trattoria.

We have 3 sons who are all chefs, and I taught them to focus on the heart of cooking. ‘It’s your art,’ I would say, and now we’re all understanding that all cooking is an art. Then about 4 years ago I opened up a cooking school, on Tuesdays and Wednesdays and I teach all that my parents taught me. When I cook, I centre myself in the creative sector of food.

Why did I add a cooking school to my already busy workload? I noticed a lot of people had lost their love for life, so I decided that cooking classes would be the door to take them to Sicily – it’s a magical island. The heart of Sicilian ‘poor cooking’ is love

It’s the Italy that nobody knows about – you taste the different cultures of all the lands that tried to conquer Sicily – the influences of the Greeks, Spanish, French, Arab, Norman, Albanian, German, Jewish. From the Silk Road, all the spices seemed to have trailed down and stopped in Sicily, and they are so much more obvious than in straight Italian cooking.

My husband’s side of the family put sultanas in meatballs, and they make a savoury gateau (gatto)– called gatto grattare meaning to grate – with mashed potato and meat – a bolognaise sauce then eggplant – like moussaka a bit. These dishes were not seen in Australia, and the savoury cake – you eat it cold and have it through the summer. It’s a bit like a layered lasagna, with bread crumbs on top of the cake.

Three years ago, I decided to write my first book, with 70 recipes from mother, Nonna, and her relatives, I wanted to embalm those moments. When my mother died, I felt the shifting of the generation being passed on. I wanted to write about being a child in the 60s as a daughter of immigrants, who bravely came out to a new world, and began again.

My purpose now is to connect the client with the heart of the table. I’m on the world wide of Who’s Who of professionals and entrepreneurs. Last year I was appointed President of the Lady Chefs’ Federation of the Italian Federation of Australia. My role is building the federation, getting members to help build the Federation. In Europe, they have 18 million members, men and women, and my role is to steer and mentor women in the field of Italian cooking.

We’re going to open up our own culinary school in Victoria. There are none that are Italian, and none that teach traditional Italian food, and I’m working on accelerating that into the ethos now, with new twists. We’re building championships, and getting young people entering competitions.

What were my lessons in life?

My first lesson is: family and heritage are the essence of who we are;

Secondly, every table in every family has their own story.

“I say to my students: ‘Food from the soul opens the heart’s appetite…”

That’s where I am now, building one step at a time, I want to touch one person at a time through my cooking, my travel tours, the lessons. For Sicilians, food is medicine, love, life And I’m also about healthy eating – you are what you eat. It’s about the table – in the 60s we had lasagnes, pasta al forno, where’s the roast dinners now? It was that smell of good food cooking that permeated the whole neighbourhood – it was an epic era that we need to awaken again. At Sorrento Trattoria, why rush? Every dish is a celebration

We’re in a world that’s fast in every way, and we’ve forgotten what life is about. We’re there to remind them to gently steer back to what their true priorities of being here, alive, are. We were the ones whose parents built this country, Australia, our foundations are stronger and we need to push that connection of what family is about. We ate at the table, we connected every night and morning. We need to go back to the foundations to input that rod that’s ours.

We’re the tree of tomorrow. “

And that, her last statement is so wise and deep, I’m floored. Thank you Carmela, for your wisdom, your knowledge, and the big heart that is at the core of everything you do. And I have a feeling Carmela will still be cooking, teaching, touring and writing for many years to come. If you visit the Trattoria, say hello, and enjoy her uniquely Sicilian take on dishes. They definitely put love on a plate.