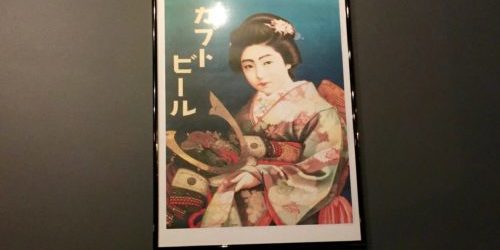 Living in Japan, I became a great fan of the humble Izakaya – Japan’s answer to our ‘gastro pubs’. Bar Wa Izakaya is a cross cultural Japanese bar in Hobart.

As one of a group of teachers from Queensland, living and working on Shikoku, we loved nothing more than heading out after a hard week to hit the sake and treats sometimes in an atmosphere, that if not familiar, was more akin to home I guess than most offers.

It’s also interesting that the Izakaya evolved to meet a similar need to that of the Tapas bars in Spain. The Japanese loved drinking sake at bars on the main trade routes, and entrepreneurial owners unfolded slowly chairs, a room, and food, to make the entire experience more pleasurable. And, of course, profitable. Just a little aside – the main picture above is of a geisha holding the Samurai helmet of her champion, who could be dead, or getting ready for war, and she’s dressing him. Every picture tells a story.

The uniformity in Japan is at times, staggering. As a teacher in the school system, I learnt quickly that on any given day, at any given time, every class would be studying the same subject according to their year across the entire country.

Izakayas as well have their own look and predictability. The short curtains across the top of the entrance, a window showcasing their wares, and on arrival, an oshibori or wet towel to clean the hands before you start. Ritual, tradition, safety in the familiar. That’s Japan, for me. Izakaya – must have sake

And similar to Spain, most food is served and shared tapas style, and when ready, regardless of how slow or fast you eat. Edamame are always on the table as an amuse geule, salty, boiled soybeans that get the palate working and waiting for the next treat.

An Izakaya or Japanese bar in Hobart? What’s not to like? And run by the savvy owners of the Republic, who did some serious research – gotta love that – it has quickly established itself as a favourite among locals and tourists looking for something different. And on the whole, it gets there.

As a group of ten, we were placed in the tiny upstairs room that sat three other couples around the edges, as we negotiated the vertical stairs and very squeezy conditions. Haaaa, I really had to laugh, so many memories of Japan came flooding back. 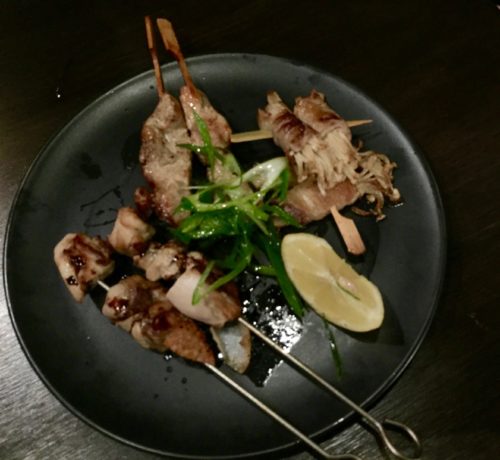 The service was bright and breezy, if a little distracted, and for the pros running this, we would have expected a slightly better quality of training for the staff.

But they were always amenable and cheery. That goes a long way for us. We ordered drinks, which were good value, as were pretty much all the offerings here.

I liked the fact that this place doesn’t pretend to be anything other than what it is: an Australian/Hobartian version of an Izakaya that takes elements from the tradition, slams them down with a nod and does its own thing.

The trio of sake, my order, at $15 for the tasting plate was incredible value, a small nip of each, but the waiter delivered, then disappeared. I had to ask him what they were on his next trip.

The yakitori, while a generous serve, were a bit dry, the two skewers each of chicken, pork and shiitake mushrooms wrapped in bacon were tasty, but overcooked, and a dipping sauce was needed. The gyoza, though, were terrific.Tasty, fresh, with a mirin dipping sauce refreshed with chilli oil were on the money. The Bar Wa-Fu Salad, fresh and light, and the okonomiyaki, while not my favourite Japanese dish ever, got the thumbs up from the crowd, and the shaved bonito flakes that shivered and danced on top, begging to be eaten, was an inspired touch. The wagyu? Yes, beautiful quality with a delicious ponzu dressing, though I find it hard to go past the New Sydney Hotel’s version where they blow torch it at the table. The fresh char that adds is terrific.

The sashimi, though, didn’t do it for me or my crowd. We all felt that the choice of fish, trout and kingfish, and sliced thickly, was dubious. The fish was almost soapy, and would have responded with love to a different treatment. We could have ordered the traditional Japanese wasabi and soy dressing, which would have given it a lift, but went with their choice. Not a fan.

We had a great night though. The place is fun, I think the downstairs is much more the way to go, and next time, a sake trip around the bar sounds like a plan. It’s nowhere near traditional Japanese, and neither should it be. Hobart gives the Bar wa its very own vibe, and overall? A great addition to the food and bar scene of our incredible city. Agree?