Pub Crawl: The Prince of Wales and pub food at a princely deal Hardly a prince among pubs, the Prince of Wales, in Battery Point, just keeps going, and the pub food was such a surprise. Some pretty good value in town.

Friday night, and in Hobart, we’re spoilt for choice. Again. It was during the Festival of Voices, and the burning was happening, songs were being sung, but the jazzy blues notes from Rektango won out.

I still can’t believe the number of locals who somehow haven’t heard of Rektango. It’s there, every Friday night, tucked away in the quarry behind Wooby’s Lane off Salamanca. It’s free, has a great and cheap bar, and the place rocks. Families, kids, oldies, hipsters, all jostle to celebrate TGIF and TGILIH. (That’s Thank God I live in Hobart).

The music is always great, the atmosphere fabulous. This particular Friday night, we wanted to eat, and maybe some more music, as the band and Rektango finish up at 7.30pm. We had a quick confab, and one of our group suggested the Prince of Wales Hotel, up Kelly’s Steps in Battery Point. “Music’s always good. And I’m pretty sure we can eat there too,” said one. “Sounds good to me,” said another. So off we climbed, up the steps, stopping to admire the view. (Not because we were unfit and out of breath. The view was important). And following the music, headed into the Prince.

Now I have to say, I hate the outside of this pub. 1960’s orange brick blah, which jars like a black tooth amongst the heritage gems around it, it’s the most uninviting building in the street. And the inside isn’t much better.

The design is awkward, with a bar on the right, where the music plays – with long high bar tables that jut into the room. Then on the left, a pub-ordinary dining space that is soulless. And in the middle, where we enter? A sort of reception bar that makes it squeezy to get in if there’s a crowd. Blecch. 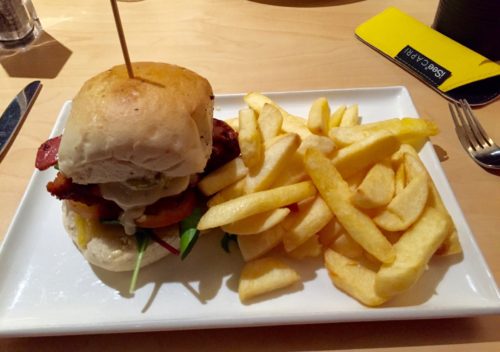 Because we’re hungry, it’s getting past 8pm, we head into the dining area, find a table, and get set up. The service is decidedly friendly, fast, and a surprise. Just like the food. Our waiter gets our menus, tells us we order drinks at the bar, and explains the specials. All with good cheer, which is amazing, as they’ve obviously had a busy night, and we’re a big table of late blow ins. I tip my hat. 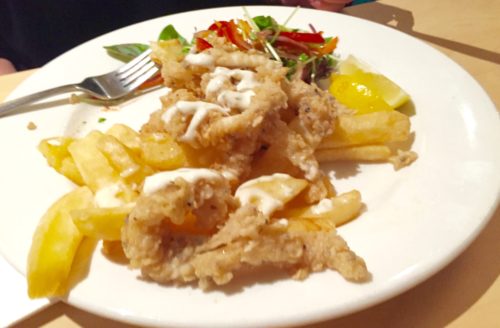 I had the Lions chicken burger, with a crispy crumbed fillet, salad, mayo, bacon, cheese, and chips. $12.50. Delicious, actually, the salad was fresh and the bun was okay. Not brioche, but at this price, who’s going to quibble?

The fish and chips was $15 for a big serve of flathead, crisply battered in Little Creatures Pale Ale and juicy inside. They were both from the bar menu, which we can order from as well as the restaurant menu – which is a bit more up market.

The parmi? $25.50 from the Mains menu, someone had the Lamb Shank also $25 cooked in a rich red wine and rosemary sauce, on mash with steamed greens. And the ubiquitous salt and pepper squid from the bar menu, served with fries, salad and a lime and coriander aioli, at $12.50? A steal.

The beer and wines at pub prices make the Prince a very tempting casual place to visit. We guess the bar sales must be propping up the food prices, but as customers, who’s going to complain about that? And though we were a big table of ten, late on a Friday night, we were served quickly, without fuss, and the food was fresh and tasty.

We moved into the front bar, and the band hammered out some classics while the punters danced, drank, and all round had a good time. Entry? Free. When we finally spilled out into the street, the restaurants had all closed and Hampden Road was a sea of quiet suburban midnight. And we made a commitment to do this more often. 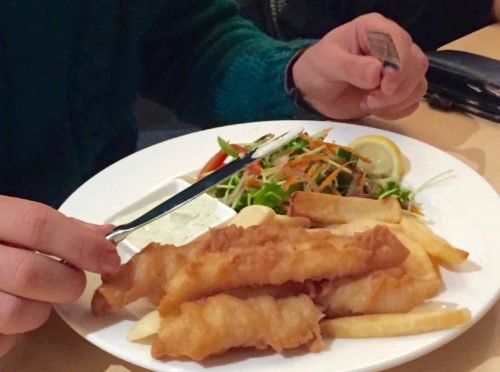 The only thing I hate is the décor. There’s been whispers for a while that it’s heading for an upgrade, and that can’t come soon enough, from my point of view. But for a quick, cheap and filling meal? This is a pub that delivers.