Wine Talk: Drinkco and wine in the blood 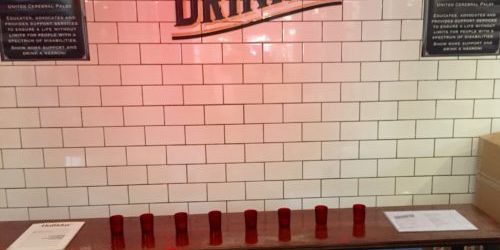 A small wine shop supporting small wine producers. This sort of passion comes from something big – heart and hope.

James Broinowski is still young, but having been in the wine and hospitality industries for 20 years, his wisdom and experience could be coming from someone much older. And when he discusses his favourite wines and the total immersion of his dreams that brought him to this spot, he almost glows.

“his new baby – the shop, which he describes as “…almost like a co-op. It’s a cellar door for small producers.” James, happy in his tiny gift to wine in Tasmania

Tucked away in the arcade at Salamanca where Phil Mason, jeweller, and Dr. Coffee bracket the entrance, Drinkco is minute. Just a small strip at the end of the arcade, enough for a tiny long table with Lilliputian stools where customers can imbibe, it is the sum of a long journey and huge effort.

Surrounded by his own vintages, and his chosen winemakers he represents, James happily tells his story, which took him around the world and into a wine network that for him, was a perfect fit.

James began his hospitality career at 13, working at Machine, and Maldini’s – both at Salamanca still, and then at Restaurant 373 (now the bookshop next to the State Cinema), which was restaurant of the year. He quickly found a love for wine, and worked mostly front of house, developing wine lists. His qualifications? The study was big. James in his wine lab

He did his sommelier’s certificate in Seattle, Washington, through the ‘Court of Master Sommeliers’ in northern America, began his Masters of Wine, and finished a Batchelor of Viticulture and Oenology through Adelaide University.

He worked on vintages around Australia and the States for Greg Harrington, America’s youngest ever sommelier.

James tells of Greg as a ‘very powerful man’, and on the back of his experience there, resolved to develop his own wine brand, “Small Island Wines”, sourcing fruit from premium growers. His wine is made at Pooley’s where he also works during vintage, and while he uses their staff and equipment, the wine itself for him, is 100% hands on.

The focus? It’s on reds, but he also does a dry rosé which typically sells out in 2 weeks. We move on to his new baby – the shop, which he describes as “…almost like a co-op. It’s a cellar door for small producers.” To make this happen, James needed a partner, and Michael Flowers, and old friend who’s been in the industry as long as James, was the perfect fit. Every wine has a story and James shares the love

They pretty much represent only small producers, of which over 80% are Tasmanian. Local. And local drinkers and visitors love it. So what is Drinkco? It’s really a bottle shop and bar, with not just premium wines at cellar door prices, but a great selection of whiskies and gins.

I notice on the shelf is my favourite, Nonesuch Gin and Sloe Gin and Sloe Malt, made by Rex Burdon, who is fast becoming an icon in the industry, by sheer dint of a pursuit for perfection that is heartwarming to see.

“We have wines by the glass, but you can buy a bottle at a cellar door price and drink it here, without any extra charges. The prices range from $20 to $220, with most of the wines from small producers who produce less than 100 tonnes, with some producing much less.” James insists on stocking premium wines at reasonable prices, and is now working on a wine club and on-line availability. He’s looking to build a business that is “…sustainable. We’ve got regulars who come in every week.”

James’ ethics stand out, in that he loves what he does, and lives by giving back, because then “ …you can’t complain. I learnt so much early on in writing wine lists. I was taught to write them for the customers – not just myself. It was a fantastic lesson which I carry with me to this day.”

James has a new vintage to be launched in December, and as we finish up, another stream of customers come in to talk to him and buy wine they can trust. And judging by the quality of everything he sells, and the prices, James and Michael are in there for the long haul. I walked out of the interview with a smile on my face, and a glow from scratching just the surface of this passionate and very knowledgeable man. James and Michael invite customers to buy food elsewhere and settle down in their tiny shop with a good bottle at a reasonable price. For all of us, that’s definitely a WIN/WIN. Have you been yet, dear reader?