Ettie’s is the phoenix from the ashes of Ethos 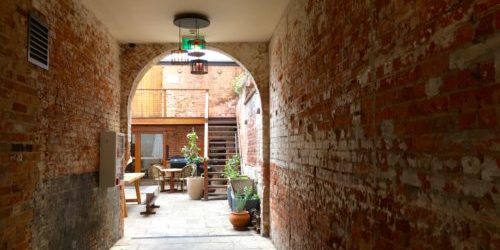 I think all of us hate to see any restaurant crash, and Hobart has had her fair share of those lately. Ethos being a major one. Whatever the reasons for that, and I am sure it was a perfect storm, I do know the owner/chef was in a world of pain when he left.

In the past, it’s been tough for anyone in Hobart to survive in that esoteric world of fine dining, chef obsessed food delivery. Hobart has a wild and rugged history. Whalers and convicts. Fifty lashes and hard liquor. And in a way, that’s still there, in each chink in the sandstone blocks that surround the locals as they wander the quiet cobbled pathways.

“And Hobart is slowly awakening like a sumo wrestler…”

Yet this is the 21st Century. Who would have thought? And Hobart is slowly awakening like a sumo wrestler, ready to take on the world with its fine produce, fine wines, whiskies and spirits, and fine cooking. So watch out, world. We’re on the map, and once often forgotten, we are now on the hit list of those in the know. It’s interesting for me as well, having had so many years in the business, behind the pass, and now, a delighted observer, so happy to not be under the gun. And that’s how it is, in most places. Service time is vicious and relentless. And so is the dining public. Is it thanks to Master Chef? Gordon Ramsay and reality cooking shows?

Who knows? It’s very easy to point fingers, but I think the customers who can now afford to eat out much more often, are naturally becoming savvy, and critical. Much less inclined to allow for mistakes, for hey? They can go elsewhere next week, and shrug off a bad experience without having to face the owners in a village. It was lunch with a colleague in the writing business, and we were both happy to try Ettie’s. It’s a brave reincarnation of the strange L-shaped space that pushes back off Elizabeth Street and boasts on the side, a most beautiful entrance. A carriageway that echoes memories as surely as the bricks were made by convicts.

But the entry to the new incarnation now is straight off the street, and the space, with its huge skylight ceiling, and a sensitive mix of the old and new, is exceptional. There’s a wine room around the bar, a bottle shop (how very European), and an incredible subterranean piano bar downstairs where the show begins on Friday nights. Can’t wait to try that. But here we are for lunch.

The service by Jess was warm, welcoming, and efficient. The wine list is careful, not cheap, but some highpoints are there, particularly the Huges and Hughes Riesling, at $12 the glass, a beautiful, superb dry but fruity wine made by the brothers from Mewstone wines. Looking at the wine list, I’m expecting the same from the food – careful, tender treatment. And for the most part, I’m not disappointed. We order the lightly battered fish, (which today is knifejaw – a new one for me), dressed greens and tartare, there’s a gnocchi with braised beef, kale and gremolata, and we also try the chicken liver parfait with crouton. I have noticed that the chicken liver parfait seems to be suddenly appearing on menus all over town, ubiquitous like Miley Cyrus twerking a while back…

However, the fish is light, juicy and delicious under its crisp shell of batter. The gnocchi also light but with a rich ragu and the gremolata gives just the right amount of zing to a strong dish, and the parfait? Well, perfectly light but sweet and tasty as any good pâté should be. Which brings us to the dilemma. Dessert. We had room, and I love sometimes a great sweet to end a good meal. But, Jess tells us, there’s only one dessert available. Crème Caramel! What? Just one? Oh, dear, so we dutifully order the crème caramel, and out it comes, looking like an angry Asian cartoon character. While the flavour of the crème was good, and it was smooth, there were nasty black specks in the sauce (not vanilla) which made me think they’d burnt the caramel, and instead of starting again, had doggedly seen it through to the end. Big mistake. And one dessert? The easiest of all dishes to do ahead and have the mise en place? I did tell a story about a chef I worked for once, who wisely advised me to always make sure that the desserts were spectacular. Why? “Because not everyone will order them, but when they do, it will be the last thing they eat that you’ve cooked. So they’ll remember that forever. Give it the care and attention that it’s due.”

I took that to heart, and never, ever forgot it. I do notice now, that Ettie’s has three desserts on the menu – so well done, and glad to see you’ve got that happening as well. Because on the whole the food, and the service was terrific. But to let the team down at the last bell? Well, say no more. The dishes at around $18 – $20 dishes were good value, and they still have their fixed price lunch of $25 for a main, a wine, and coffee. And that’s a bargain, in anyone’s language. What are your feelings on that, readers? Do you like to finish with a dessert? Or just go savoury?