Review: Rockwall in Salamanca is never between a rock and a hard place Rockwall, Salamanca, is one of those iconic Hobartian restaurants that just keep delivering to a devoted core of local customers who love what they do with a passion.

And then there’s the tourists, who seem to know this busy place at the end of the Salamanca strip as if they’d been born here.

I’ve been there a few times over the years, and never been disappointed with the food. The service on one occasion was ridiculous – I think we waited almost two hours for our meals and got fantastically drunk as they topped up the wine while we waited. But that’s been a once off, so all was forgiven, especially in light of the food. It’s not an exciting menu, or inventive, but it’s full of staples that sometimes we need after a surfeit of menus that make head scratching de rigeur. The menu, I feel is big, particularly given the size of the kitchen, which is a galley set next to the bar as we wander in.

“Donna’s pie, though, is spectacular. This would go down as one of the best pies I’ve had in a long time.”

And this is a Friday night, it’s Donna’s birthday, and we girls are out to party. And as always, Rockwall is as alive as Donald Trump’s sex drive. The space has been set to use every spare millimetre for dining, and the spectacular quarry rock wall that sits benignly at the back reminds us of this building’s past.

I’m a wee bit early, and have been served a delicious cocktail at the bar and in quick time. These guys are pros (St. Albi’s is a sister restaurant run by the daughter of one of the owners), and the service all night is fast, knowledgable and professional. We have the one girl who looks after us, in her station, and what a pleasant change that is. Rissoles – but probably not as you know them

We dither at the menu choices, and there’s a good selection of dishes from duck, lamb, beef, fish and a lot inbetween, but I can’t go past the small (250 gram) eye fillet with the coffee rub, mushroom sauce and vegetables. $40. The others hit up the Eye Fillet Rissoles with bacon, caramelised onion gravy $26, (Angie is coeliac so a perfect gluten free option for her), birthday girl has the Beef and Guiness Pie with pea mash at $28, another has the beer battered fish and chips, with salad and tartare, $33, and another has the eyefillet as well.

All dishes are cooked exceptionally well, the coffee rub on the eyefillet is deep, tasty and adds a wonderful flavour to the perfect slab of meat that I demolish. I also indulged in a pat of the house-made café de paris butter, just in case I haven’t had my cholesterol fill for the week.

Donna’s pie, though, is spectacular. This would go down as one of the best pies I’ve had in a long time. The pastry is crisp, buttery and the filling a delicious meaty, black beery perfection. The rissoles – a nice upmarket take on an old traditional family dish get the thumbs up. Juicy and tender as they should be, and not dripping in fat either, on a bed of mash with a rich gravy. 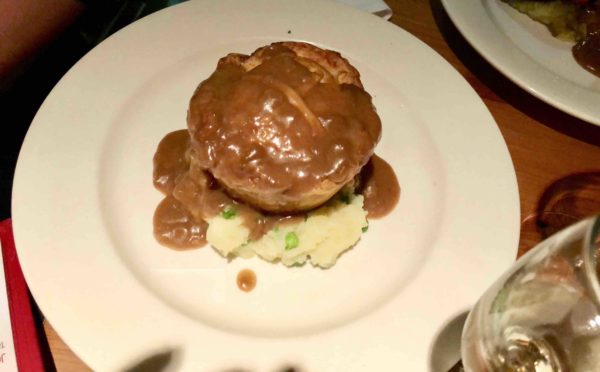 And here’s the only criticism really: all the sauces seem to be of the pre-prepared variety, (correct me if I’m wrong), but given the incredible limits of that tiny kitchen which is also serving two big functions upstairs, they can be forgiven. So I take my hat off to those guys slamming out food like line cooks at an American county fair. The vegetables match the dishes as well, and are all perfectly cooked. The fish and chips are crisp and tasty, so it’s no surprise that even though the serves would satisfy a truckie working for Lyndsay Fox, we march on to dessert. And for me, I can never go past the Turkish Delight Panna cotta, which is always a creamy, sweet, nutty mouth party. $14. Donna has to have the Espresso Martini to finish up, $18, of course she does, and there’s a Crème Brulée that’s a great example with a cracker crust, and a Sticky Date, both $14. 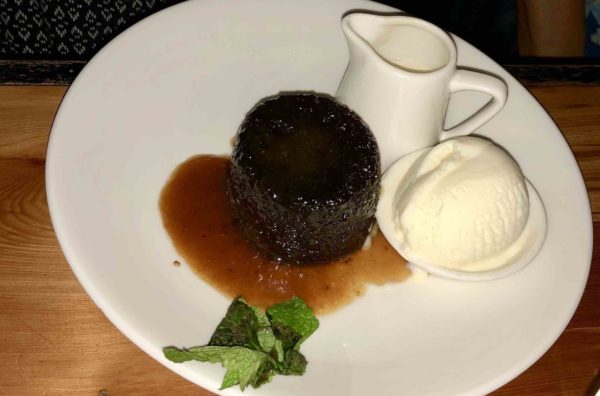 Our waitress sees us out, and like all great floor staff, we feel we’ve made a new best friend. The inside is so loud that noise was a bit of an issue, but that’s almost what makes this place a dynamic, living, authentic restaurant. Rockwall in Salamanca is loud, rambunctious, busy, and somehow amongst all that, the tiny kitchen works miracles in good time. We’ll always be back.